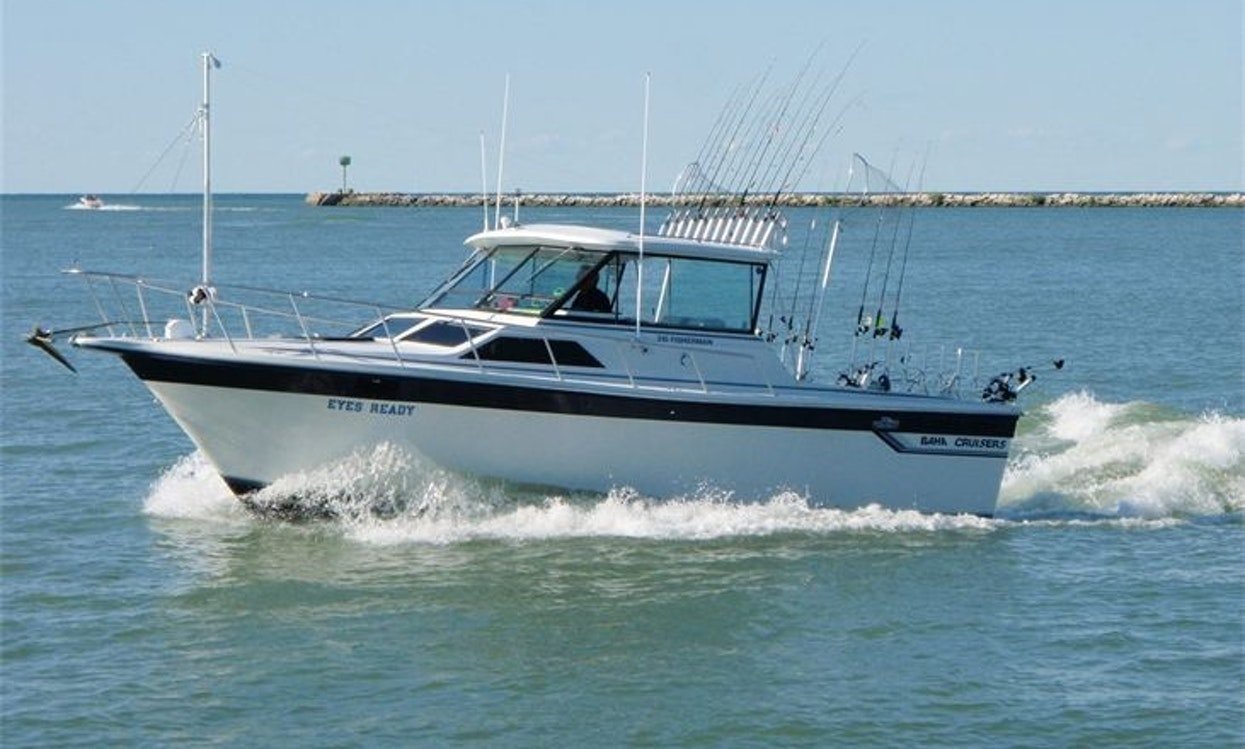 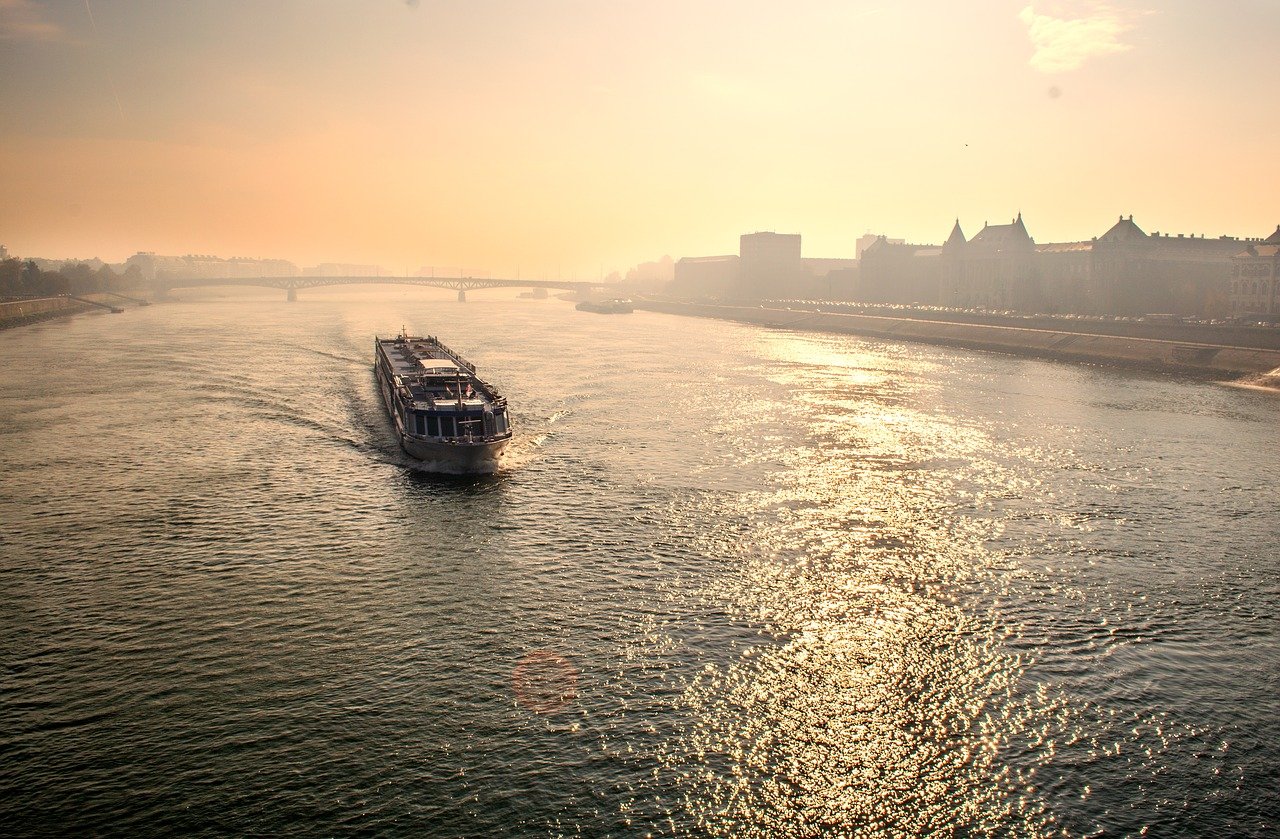 Boating on Rivers, Lakes, and Oceans 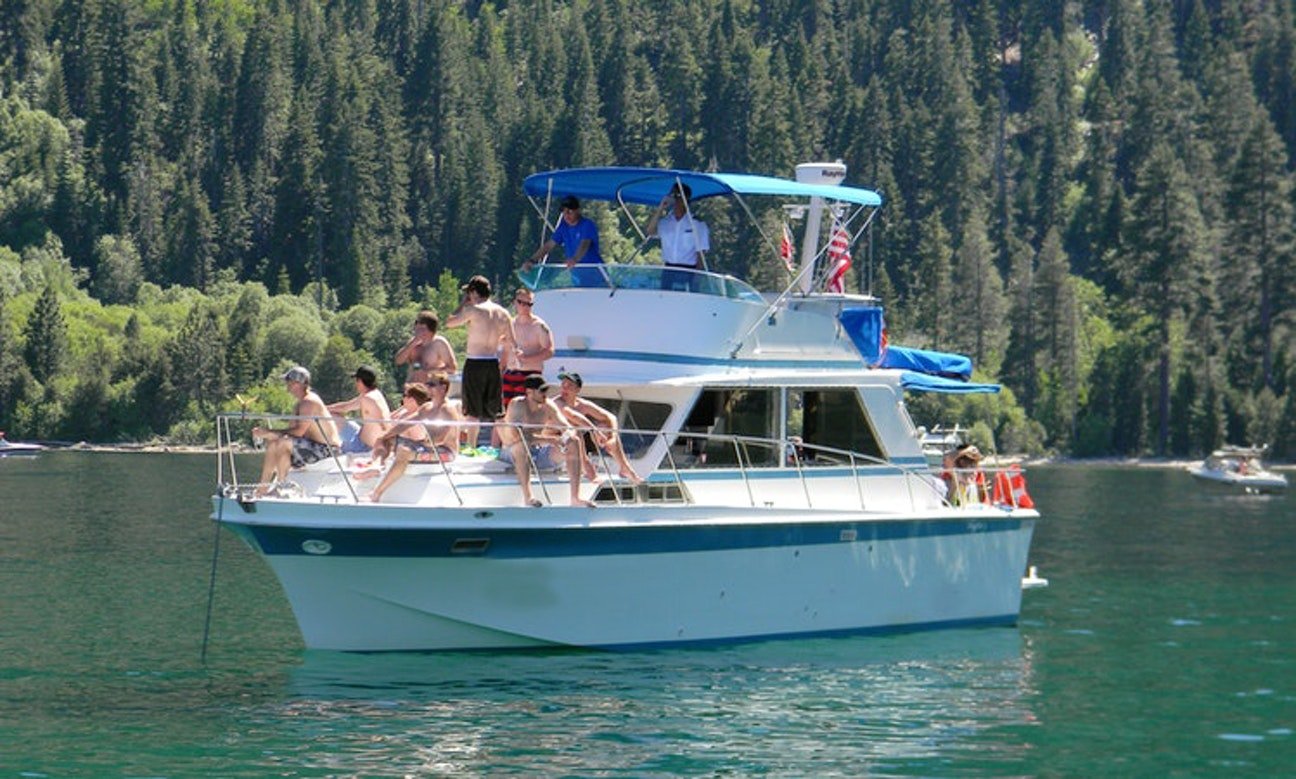 The Top Boating Lakes in the US - GetMyBoat

The Great Lakes is one of the largest inland freshwater lake systems in the world. Their southern end sits in the heart of the manufacturing Midwest and stretches north into Canada. Boating in the Great Lakes is a great option for many different kinds of boaters. The area provides a combination of urban access, historical sites, watersports, fishing, diving, breathtaking scenery, and unique wildlife.

For those who have never been here, they are also as close to a freshwater ocean as you are likely to see, with tides, currents, wind waves that can reach over six feet, and passages that are too wide to see the other side. On a map of Lake Michigan, for example, though it may seem long and narrow, the lake is close to 100 miles wide, much too far to see across. All of the lakes are connected to one another, and the Erie Canal and Saint Lawrence Seaway can be used as connection points between the lakes and the Atlantic Ocean. 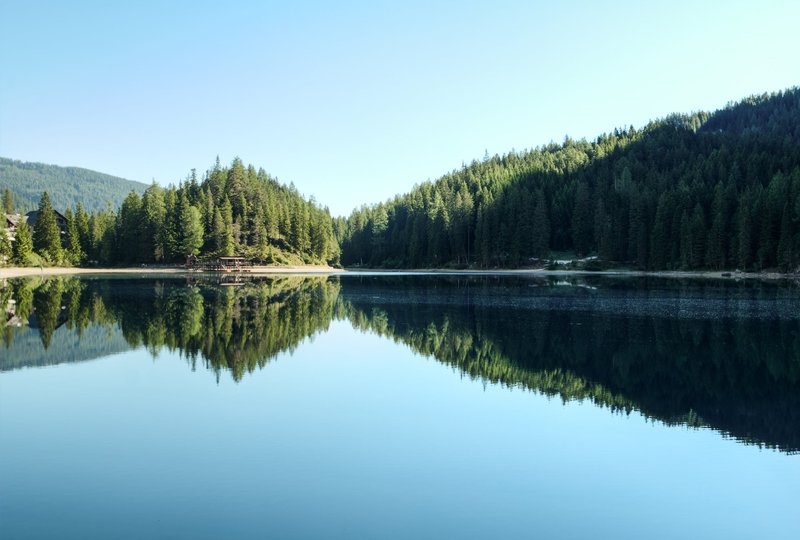 The Great Lakes have excellent boating for many kinds of boats. Sailboats, large pleasure boats, and small ski boats will all find great locations. Different conditions should be watched for each of the boat types. Small boats should be wary of wind waves and large vessel traffic in the shipping lanes. Large boats should be certain that they have planned their fuel stops, as certain sections of shoreline are not as conducive to deep drafts. Also, if your boat is too large to put on a trailer, you need a winter plan to pull your boat out of the water. Winter can ice a boat into a dock. Sailors need to choose their passages carefully both to maximize wind and to avoid areas with too many jet skis and ski boats. For those new to the area, there is a ton of boating information about the Great Lakes Seaway Trail, which is designed to maximize enjoyment for Great Lakes boaters.

Here is a look at the five lakes, and what each has to offer boaters.

Erie is the southernmost and the shallowest of the five lakes, which makes it the warmest as well. Old-timers may warn you away from swimming or trying watersports here, as Lake Erie used to have a reputation as one of the dirtiest water bodies on the planet (it once caught on fire!). However, the establishment of the Clean Water Act did a lot to protect and restore the environment here, and watersports are very common and safe. It's a good destination to rent a boat and explore.

Lake Erie forms the northern coast of much of the state of Ohio. It also shares borders with Ontario, Michigan, Pennsylvania, and New York. It can be accessed from the west through Lake Huron, and from the north and east through the Erie Canal or Lake Ontario. Though there is much to do here, there are a few definite highlights: 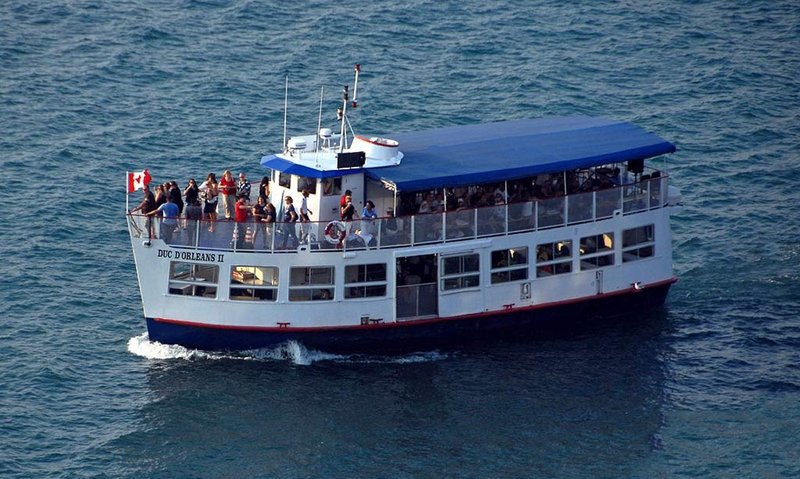 This lake gets quite a bit of boating, as several major cities in the Detroit metro area and its Canadian neighbor Windsor sit along Huron’s tributary, the St Clair River. Lake Huron is great for boating, swimming, and staying in coastal campgrounds from the thumb area of Michigan and northward. At the north end, Huron meets up with Lake Michigan. You can rent a boat on Lake Huron and explore the various regions, depending on where you're traveling.

The narrow section of Lake Huron divides the Lower and Upper Peninsulas of Michigan and is home to the tourist haven of Mackinac Island. At the South end, the attached St Clair River winds its way into Lake Erie. Lake Huron is relatively sheltered and is a great place for swimming and watersports, as well as fishing and boating. There is some wreck diving available here, but not as much as in some of the other lakes.

Lake Huron’s location along the inhabited section of the Canadian border gave it a prime role in the war of 1812, as the site of many naval battles. A few military forts remain along the coastline and are available for tours. The region to the north of Detroit has a large number of mansions with their own docks that sit along the shoreline between Detroit and Lake Huron. Many are owned by captains of industry and founders of Detroit’s many fortune 500 companies. 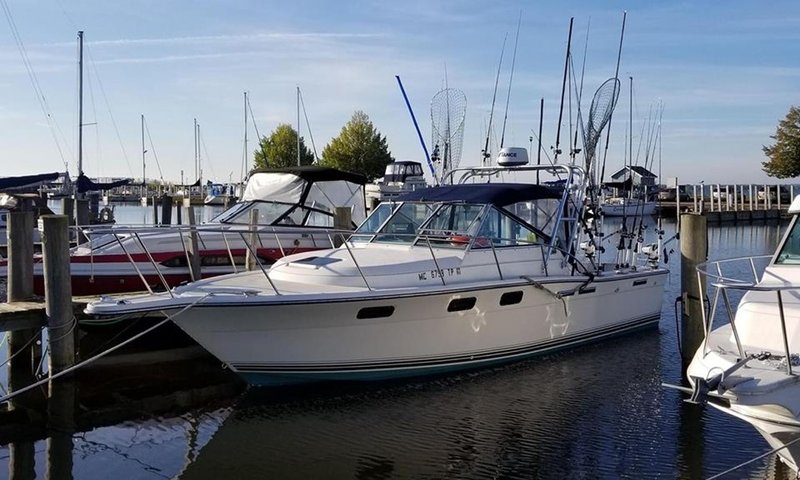 This lake to the North of New York state is the easternmost of the lakes and the doorway to the Saint Lawrence Seaway and the Atlantic Ocean. It serves as a major seaway for international shipping from the Great Lakes manufacturing cities. There are a few smaller cities along its shores, but nothing large. However, this makes Lake Ontario a haven for boaters, as coastlines are mostly reserved for smaller boats and have a great selection of marinas. Lake Ontario has an excellent choice of almost 100 marinas and fuel docks along both coastlines and is a great fishing lake. The southeastern coast of Lake Ontario also has a number of great white sandy beaches, a remnant of the inland sea that was originally in the location of the lakes.

The best-known location on Lake Michigan is, of course, the city of Chicago. However, different regions of Lake Michigan are known for many things. The northern end was a major iron ore extraction area on the coasts of Wisconsin and northern Michigan. There is a famed coast guard station in southern Michigan that is known because the cutters in this area are designed for the surprise steep waves of the lake, and can flip and right themselves in the choppy water. There are a number of wrecks here for great diving, and the Michigan and Indiana coastlines here have beautiful sand dune parks along the shoreline, a product of the constant wind coming off of the plains. That same wind makes the east coast of Lake Michigan great for windsurfing, parasailing, and even surfing.

Most of Lake Michigan is bordered by the coasts of Michigan and Wisconsin, with small sections belonging to Indiana and Illinois. If you follow the Great Lakes trail beginning from the east, Chicago will be your final destination, as it is the furthest point to the southwest along the lakes. Don't miss out - make sure you rent a boat in Chicago on Lake Michigan.

There is a ferry that crosses the stretch between Ludington, Michigan and Oshkosh, Wisconsin, and even then passengers and even crew sometimes get seasick. High summer is the only time that it is usually calm enough to run a ferry on flat, so those who like to boat on relatively calm waters should consider this when boating on Lake Michigan. 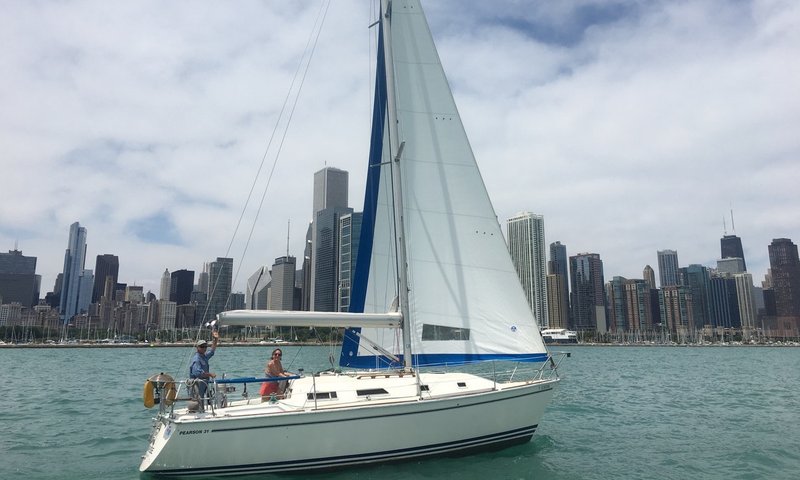 Lake Superior is the largest and northernmost of all the lakes. It has the shortest boating season due to its latitude and is always a cold swim. The conditions are stark and beautiful here, and there are a number of beautiful national parks and shorelines to discover. Superior can be reached at the north end of Lake Huron, through the Soo Locks. Lake Superior does not have a great marina presence spaced evenly along its coastlines like Erie and Ontario, but the natural beauty here is unparalleled. Painted Rocks National Lakeshore is a collection of steep sandstone cliffs layered with colored mineral deposits. Turquoise waters hang below swaths of red, orange, and gold, and create spectacular views and hiking and climbing opportunities. Isle Royale National Park is isolated in this lake and offers access only by boat for campers and hikers. The island is famous in the biological community for helping to discover much about moose/wolf population interactions without interference by man. Wreck diving is popular here, as there are many ships dating back to the early 1800s to discover. 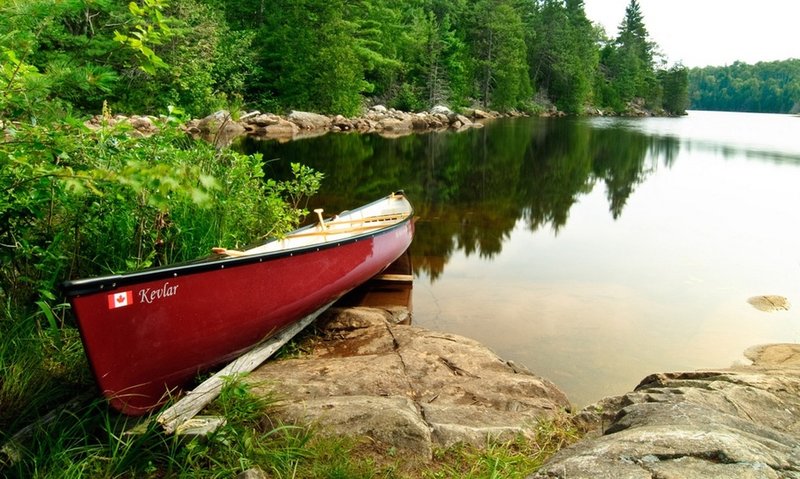 Tips for Boating on the Great Lakes

Finally, there are a couple of boating tips that you should consider for all lakes. First, freshwater lakes are seasonal. Do not plan an early spring excursion unless you are certain the unseasonably warm spell will continue. Both freak ice storms and major winds are common at this time of year. Second, if using a trailered boat in the Great Lakes, do a very good job of rinsing your intake when you are done. The lakes are fighting a zebra mussel infestation and trying hard to keep it from spreading. If you are unsure of what steps to take to prevent mussel spread, check with the public marinas on tips to clean properly.

No matter which Great Lake you choose, you are sure to find unique and fun opportunities.

Want to rent a boat on the Great Lakes and cruise? Download the GetMyBoat app and search boats available near the location you're checking out.